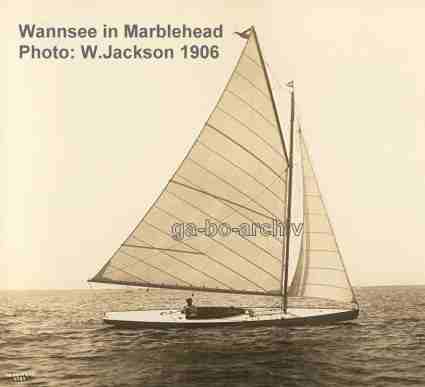 For forty years after the turn of last century, Willard Jackson trolled the waters off Marblehead, Massachusetts, in a custom motor launch carrying a wooden camera and a box of glass-plate negatives. Any significant yacht or working craft that made its way into and out of that mecca of American sailing. Jackson sold his photographs to private boat owners and to yachting magazines like The Rudder and in Germany to THE YACHT (from 1906 up to 1930 you will find many pictures from Jackson). Over a century later, the archive of several thousand pictures he collected, stands as a one-of-a-kind record of the early development of the American yacht.
Willard Jackson marine photographer living in Marblehead, Massachusetts at the turn-of-the-century. He advertised as a "Marine Photographer" in the 1901 edition of Yacht Racing Association of Massachusetts Racing Rules. His first public recognition as a marine photographer came to Gemany in 19067 when his photographs were published in Yachting magazine Die Yacht. His photographs were later to addorn the pages of Rudder magazine, make the cover of Yachting and add significantly to the illustrations in B.B. Crownenshield's famous book "Fore-and-Afters" . Recently in Germany you will find some photos from Jackson in the book Die Sonderklasse. Substantial portion of his work now resides in the Peabody Essex Museum collection in Salem, Massachusetts. Some Jachson-photos from my archiv, most special prints from the yacht, you will find on this homepage. More Jackson photos on the homepage sonder class link 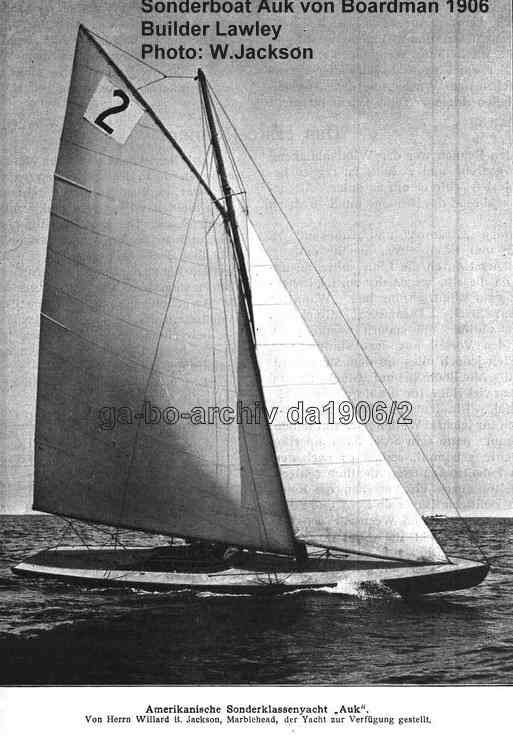 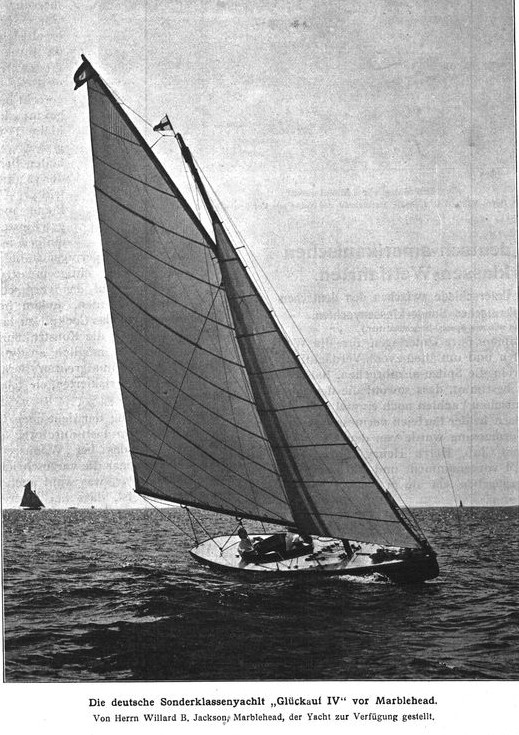 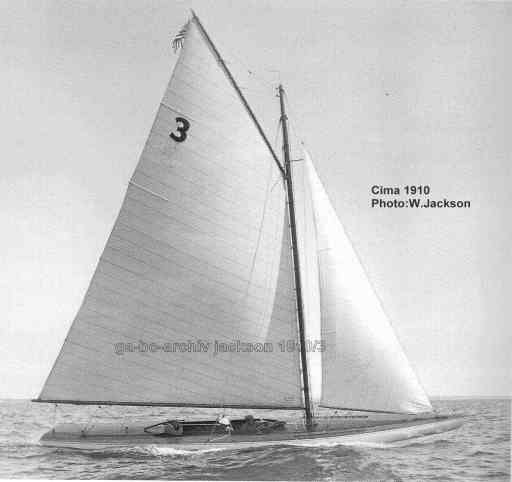 Architect Wood,USA 1910 still racing in Austria as Cima. Photo Jackson. 1951 Cima won the "Östereichische Staatsmeisterschaft in der Sonderklasse"
New 2006 Exibition and Book
THE YACHTING PHOTOGRAPHY OF WILLARD B. JACKSON May 20, 2006 – Jan. 21, 2007 Peabody Essex Museum In a scene repeated thousands of times during the heyday of American yachting, photographer Willard Bramwell Jackson (1871–1940) could often be found motoring his sleek white powerboat, Alison, rapidly around a sailboat in the waters off Marblehead, Massachusetts. In his work, Jackson captured the many dimensions of yachting with meticulous artistry—from graceful boat designs to a sporting life of outdoor exhilaration, to the intimate affinity sailors share with their vessels at sea. From May 20, 2006, to Jan. 21, 2007, the Peabody Essex Museum will feature over 50 works from the museum’s major collection of vintage photographs in the exhibition The Yachting Photography of Willard B. Jackson. Most of the photographs in the exhibition, some measuring 25 by 30 inches, were created from large-format glass-plate negatives, resulting in images of exceptional detail and richness. More you find in the press wjackson.pdf link
and the website of Peabody Essex Museum link

The book Glass plates and wooden boats ; the yachting photography of Willard B. Jackson at Marblehead 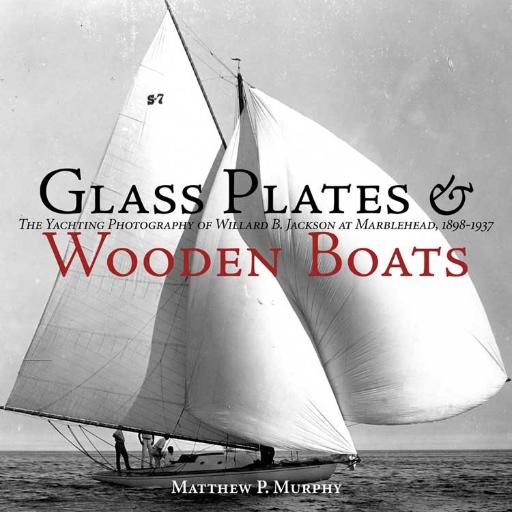 Matthew Murphy, who grew up sailing the waters of Salem Sound, has studied Jackson's work in the archives of both the Peabody Essex Museum and the Hart Nautical Collections of the Massachusetts Institute of Technology Museum. (The publication of Glass Plates & Wooden Boats coincides with a major exhibition of Jackson's work at the Peabody Essex Museum.) By thoughtfully selecting and analyzing 75 images, representing the development of the pleasure sailboat in the four decades before World War II, Murphy gives us a mosaic history of this great period in American maritime history. Dan Finamore, curator at the Peabody Essex Museum, provides a thoughtful foreword about Jackson's life and art. Each Jackson image is printed full-page in this beautifully designed volume. The table of contents outlines the evolution Murphy describes so vividly:
1. From Workboat to Yacht. 2. Knockabouts and Such. 3. One-Designs.

4. Sonders and Square-Meters.
Pictures with Sonders Sonder boats start of the Roosevelt Cup 1906 (also published in THE YACHT) Start of the Rossevelt Trials 1906 Glückauf IV Vim Pictures with Square-Meters (in Germany 30 Schäre. follows after WW1 the Sonders) Bacchant Oriole (the yacht with a lady on the rudder came later to races to Germany)

5. Between Land and Sea (the yacht clubs and other fixtures of sailing life on Boston's North Shore). 6. Schooner Yachts. 7. The Universal Rule. 8. The Cutting Edge. 9. Visitors, Voyagers, and Cruisers (a miscellany of passers-through, including USS Constitution) Reviews 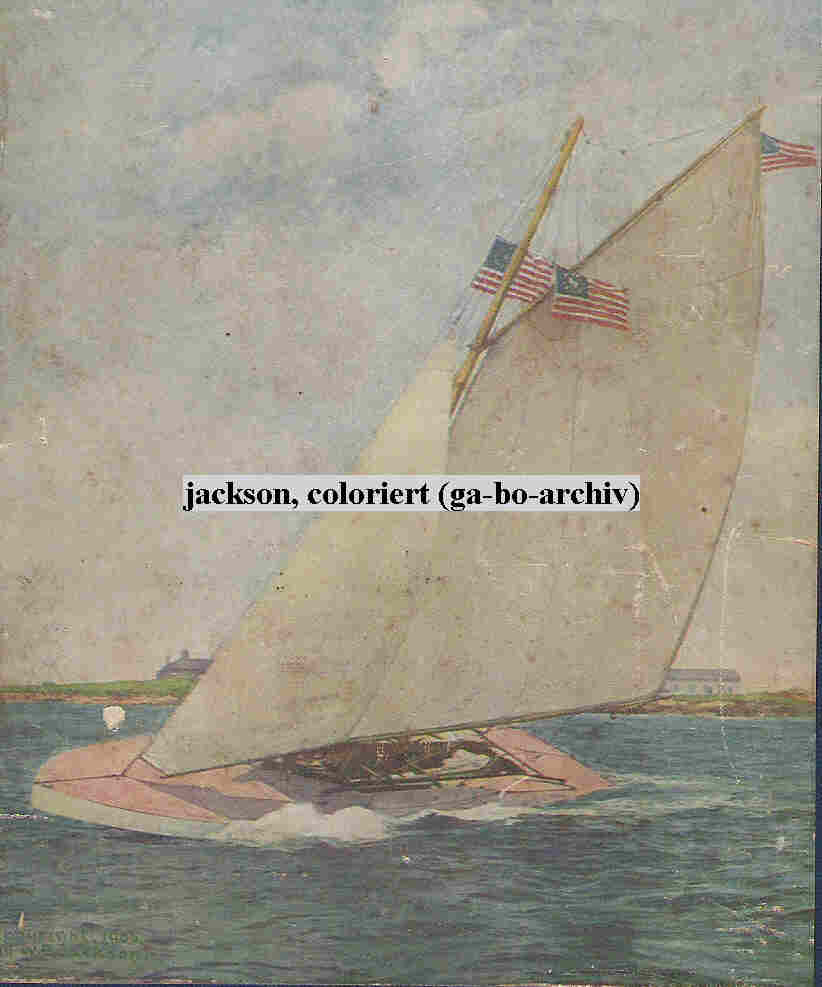 coulored Jackson Photo, Yacht Manchester the winner of the Seawanahakapokal 1905 not a Sonderboat, small yacht in Marblehead before the Sonders,no keel